If Anyone Asks, It Was Oxford

I presented a paper at an Oxford University Roundtable this past October.

I've presented papers I've written before—in the universities I've attended here in the states, specifically LaSalle and Rider, but they were essentially classroom discussions. Oxford was different. It was the big leagues. Hell, man; it was OXFORD!

Of course the universities that conferred degrees upon me were not the minor leagues, mind you, but, I mean…hell, this was Oxford!

Out of the 14 presenters, I was the only non-Ph. D., and I told them so, declaring myself the “dummy” of the group. (I figured I’d get a better reception if I buttered-up the docs a bit first!)

Maybe it worked, because I believe it was well-received. It sparked some lively debate, and I made some salient points. (Do you like that word—salient? I pulled that one out of my holster during the presentation. It seemed like a good Oxford word. I did mention that the presentation was at Oxford, didn't I?)

I didn't see much of London, outside of Heathrow Airport, during the four days I was in England, but I had some spare time to socialize with and get mildly assimilated among the British general public in Oxford (when I wasn't hanging out with the profs).

The easiest way to express my opinion about the experience is to repeat the answer I gave my wife when she picked me up at Philadelphia International and asked, “How was England?” I told her I would move there tomorrow, if it were practical.

That surprised her, since she was well-aware that the airline had lost my luggage and it didn't
show up at my hotel until 7 p.m. the evening before I left to come home. So she quite naturally expected me to start wailing about what a disaster my expedition to the UK just had to be.

Consequently, my appearances at Oxford the first day, the second day, and the third day, were in the blue jeans I wore for travel. They were new, pressed, and presentable (pun intended), but they were jeans. And hell, man; this was Oxford! And here I was standing in front of (to me) academic aristocracy pontificating on the state of contemporary higher education.

Serendipitously, I discovered that my audience was concentrating on the content of my presentation and not at all concerned about my élan (or lack thereof). This, in retrospect, is exactly what I should have expected. They were interested enough in my topic and sympathetic enough about my wardrobe limitations to make me feel a legitimate part of the group.

Nor did the British cordiality end at the gates of the university. Oxford—the city—is a college town and accordingly is heavily populated by students, most of whom get from here to there on bicycle. They (and their bikes) are all over the place. They ride with the traffic in the streets and follow strict traffic rules, including stopping for red lights, wearing helmets, using hand signals, and being equipped with their own lighting.

Whenever cyclists ventured onto the sidewalk, they dismounted and walked their bikes. And if a pedestrian was standing in the way, they waited until the walker moved! Really!

I was standing by a bus stop talking to one of the professors when I chanced to look behind me and realized that there was a pair of cyclists patiently standing there, waiting for me to finish so they could pass. Imagine that! And when I stepped back and said, “Oh, excuse me,” they both said, “thank you.”

Oh, and by the way, there was an endless queue (another word I latched onto in England) of bicycles parked along the walls, fences, and sidewalks adjoining the university. I did not see one that had a lock attached.

I have to tell you, when the townspeople—students, shopkeepers, professors, taxi drivers, bus drivers, shoppers—are outwardly cordial, and bikes are left unlocked, and the intelligentsia is actually interested in what you came there for…well…that’s a place I could move to.

Did I mention that it was Oxford? 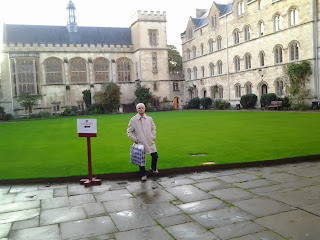 Me in my travel-jeans on an Oxford quad after my presentation. (Note the emergency briefcase I used until my luggage arrived.)
Read more »
Posted by Jim Vanore at 1:16 PM 3 comments:

Jim Vanore
Born in South Philly, Jim Vanore, an editor and columnist for the Cape May County, NJ Herald from 1991-2013, is a retired Philadelphia Police sergeant, novelist, and award-winning writer whose work has been recognized by the Philadelphia Press Association, New Jersey Press Association, and Independent Free Papers of America. He is the author of “The Changing Face of Education: A Faceless Change,” in On the Threshold of Change: Shifting Paradigms in Education, ed. Samuel M. Natale, Anthony F. Libertella, Global Scholarly Publications, 2014, pp. 127-153, which he presented at Oxford University. He is also the author of two novels: Grave Departure (1995) and Beware the Leaven (2000), also published in Italy as "Il Vangelo dei Vampiri" (2008). He received his B.A. (History and English) from LaSalle University (1978), and M.A. (Management) from Rider University’s School of Public Policy and Administration (1983).